The Conjurer’s Field Archaeological Site is located on the former plantation of Conjurer’s Neck along the Appomattox River. Archaeological excavations at the site have unearthed artifacts representative of the prehistoric Middle and Late Woodland periods.
In 1620, a small group of colonists settled in the spot where the Swift Creek runs into the Appomattox River. The place came to be known as Conjurer’s Neck because a Native American priest or healer, which the English called a "conjurer," is thought to have lived there at one time. The presence of such conjurers was considered protective, as they were believed to ward off evil spirits dwelling in the waters.


The Brick House was purchased by Robert Henry Batte of Petersburg in 1880. A year before that, a fire that had started in the adjacent kitchen spread to the house, destroying its interior and cracking the north wall. Extinguishing the fire had been difficult because the well was too close to the burning house, and the tide was out in the nearby river. Sometime after the fire, the north and south walls were replaced with new walls that eliminated the recesses at both ends, effectively shortening the house. Batte sold the Brick House in 1885 and once again, it passed through a succession of owners. 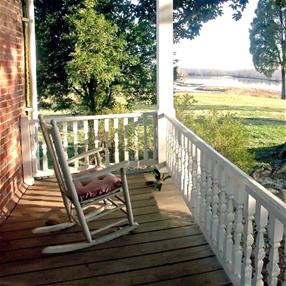 In 1909, Willis Comstock purchased the farm and the Brick House. At the time, there was attached to the north side a two-story wooden addition, which was torn down in 1971. Occupied primarily by the Comstock family until 1988, the Brick House was briefly used as an office for real estate agents selling property in the Conjurer’s Neck subdivision.

In 1990, it was deeded to the Conjurer’s Neck Homeowners' Association, with ownership transferred to the Old Brick House Foundation in 2001. In 2003, both the house and the surrounding property were incorporated into the Conjurer’s Neck Archeological District and listed on the National Register of Historic Places.

Today, the Old Brick House incorporates many architectural changes made over the years, including 18th century Flemish bond brickwork on the exterior. However, it is thought at its core to be the oldest brick house in the region and among the oldest houses in Virginia.

The Old Brick House may be rented for special occasions, such as weddings, wedding parties, family reunions, and other public events.

View video below for a complete history of the building and the area: