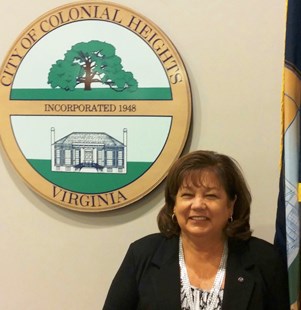 Betsy attended school in Colonial Heights and graduated from CHHS in 1976. She got her degree in Elementary Education from Atlantic Christian College, now Barton College, in 1980. Betsy received her Master’s Degree from Averett University in Curriculum and Instruction in 2008.

Betsy married her high school sweetheart, Hugh Luck, in 1980. They have two children, Brandon and Jessie. Brandon is married to Jennifer Atkinson Luck and they have three children, Aubrey, Colson and Garrett. Jessie is a teacher in Prince George County and resides in Colonial Heights. Betsy is also blessed to have both of her parents, Bill and Jessie Gentry and her mother-in-law, Mary Seaborn Luck, living in Colonial Heights.

For 35 years Betsy taught kindergarten, in Prince George from 1980 to 1998, then in Colonial Heights from 1998 to 2015. Betsy retired in 2015 to enjoy more free time with her family and friends. She also enjoys reading, solving problems, helping people and learning new things. She is honored to be able to serve the citizens of Colonial Heights on City Council.