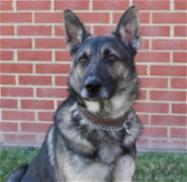 
Our Narcotics canine, Blitz, is a German Shepherd born on September 21, 2008, in the Netherlands. He joined the Colonial Heights Police Department in the spring of 2010 after completing the 12-week narcotics training course at Newport News Police Department. Blitz is certified in the detection of various illegal drugs.

Blitz has been successful in finding a variety of illegal substances which have lead to the arrest and successful conviction of the numerous offenders. Additionally, Blitz is utilized for drug sweeps of city school buildings and grounds. He is available to assist other local police agencies with searches of schools and the execution of search warrants. 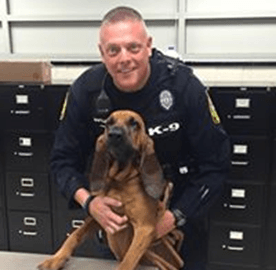 
In 2015, the Colonial Heights Police Department added trailing K-9 Rose.  K-9 Rose is a bloodhound and was born on September 18, 2013, in Inverness, Florida.  Her training began at only 10 weeks old and continues to this day in conjunction with her handler.  Rose has the ability to follow the trail left by a human being’s scent, which is vastly different than that of tracking K-9’s ability. Rose is utilized to locate missing persons and suspects, in addition to other duties for which a trailing canine would be useful.  Along with being a fan favorite during citizen demonstrations, Rose has had many successful “finds” in her career.  She performs regular training with several agencies, to include the Virginia State Police, Newport News Police Department, as well as the Federal Bureau of Investigation Forensic Canine Unit.  Rose’s handler is Career Officer Christopher Wulff, who has been a police officer in Colonial Heights since 2003.