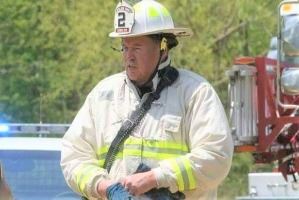 Chief Hoover has served the Colonial Heights Fire Department in starting as Firefighter Paramedic in 1993 and most recently served as the Deputy Fire Chief.  Wayne started in the fire service in his hometown of Victoria, Virginia in 1987.  He was hired by Petersburg Fire Department in 1989 and then by Colonial Heights in 1993.  Wayne served as firefighter for 3 years and was promoted as one of the city’s first Battalion Chiefs in 1996.  He was promoted again to Deputy Fire Chief in 2018 and served as the Interim Fire Chief for 6 months prior to his promotion in May of 2020.  Wayne currently holds a college degree in Emergency Medical Services

Wayne has taught classes throughout the state through the Department of Fire Programs and Virginia Department of Emergency Management.  These classes range from Fire Suppression to more advanced Large-Scale Incident Management Courses.  He has been part of the City of Colonial Heights Emergency Management Team for major storms, floods, hurricanes and other large-scale incidents including the Tornado of 1993 and Hurricane Isabel in 2003.  Wayne has been the project lead for many grants and projects in the city and the department that have increased the level of service we are able to provide.

Together Wayne and his wife Sandy have 5 children and 2 grandchildren.